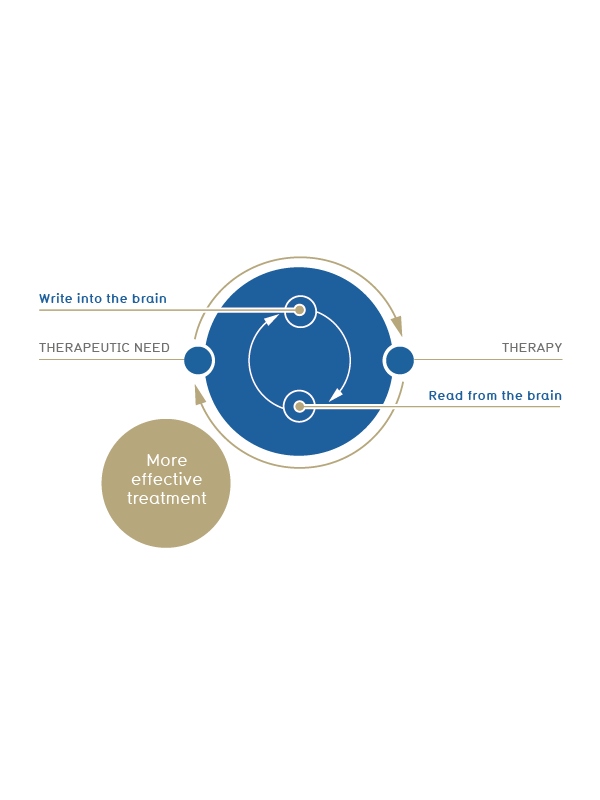 Neuromodulation can be an effective treatment for a variety of neurological and neuropsychiatric disorders, such as Parkinson’s disease, epilepsy, traumatic brain injuries, and obsessive-compulsive disorder (Swann et al., 2018). Electrical stimulation impulses are transmitted to the nerve tissue either in an open or closed treatment circuit (open und closed loop) (Gardner 2013; Ghasemi et al., 2018). Closed-loop approaches are of particular interest with regard to the personalization of therapy and the further development of the field.

In neuromodulation, implants similar to a cardiac pacemaker are curretly used, which are typically also placed in the chest area to enable continuous electrical stimulation of certain brain regions. The history of the use of electrical currents for the treatment of brain diseases goes back to the year 1757, however, today’s methods of neurostimulation were only developed by researchers 200 years later (Benabid et al., 1987; Delgado et al., 1952; Bekthereva et al., 1963; Sam-Jacobsen, 1965). These methods often involve stimulating deeper cortical and subcortical regions of the brain through one or more electrodes that penetrate the brain tissue. They are known as deep brain stimulation or DBS. In 1989, the first neuromodulatory implant based on early DBS technology received approval from the US Food and Drug Administration (FDA) for the treatment of chronic pain. Continuous further research into the method prompted the FDA in the early 2000s to approve the technoloy for the treatment of tremor and Parkinson’s (Gardner, 2013).

DBS and other forms of neuromodulation use open or closed loop methods to stimulate neural tissue (Ghasemi et al., 2018). Nowadays, open-loop stimulation is the most common. In this method, electrodes provide the patient with a fixed stimulation set by a doctor. The stimulation parameters, i.e. duration, amplitude and frequency of the pulse train, remain constant. The doctor can adjust these parameters based on the patient’s condition and previous treatment results to enable effective treatment with minimal side effects (Rosin et al., 2011).  These open-loop paradigms are relatively successful and well-established but there is great potential for a more personalized approach via closed-loop stimulation.

Scientific studies indicate that the closed-loop approach could improve exsiting therapies and/or enable the development of new therapies (Rosin et al., 2011; Ghasemi et al., 2018). The closed-loop system can automatically and dynamically adjust the electrical impulse and stimulation parameters without manual intervention. It takes into account the variance in the patient’s condition through a system that continuously receives and evaluates feedback from the patient’s nervous system via a programmed algorithm (Parastarfeizabadi et al., 2017). Closed-loop neuromodulation can only occur in combination with a sensor that records a signal that is linked to the patient’s symptoms: this sensor detects physiological changes in real time and enables the stimulation parameters to be varied individually in order to reduce the risk of side effects decrease while increasing the effectiveness.

Closed-loop studies such as those for the treatment of Parkinson’s disease show concrete examples of a proven improvement in symptoms, while the side effects caused by the stimulation are reduced and a considerable amount of energy is saved. Swann et al., 2018, demonstrated closed-loop or “adaptive” brain stimulation with a fully implanted neuroprosthesis in two patients with Parkinson’s disease. This implant works with an algorithm that can recognize a cortical physiological neural signature related to dyskinesia and update the stimulation voltage for the patient as needed (Swann et al., 2018). Other studies, such as by Malekmohammadi et al., 2016, from the University of Florida and groups involved in the DBS think tank reports, advocate closed-loop treatments of tremors and walking blocks in patients with Parkinson’s disease. Various groups of the BRAIN initiative of the US government are also investigating the use of closed-loop in Parkinson’s related tremors, motor regeneration after a stroke or for learning processses.

Classic open-loop neuromodulation is already highly effective in diseases such as Parkinson’s disease. Hoever, the closed-loop approach enables a further improvement in therapy. The closed-loop therapy results in advantages for the patient, such as the reduction of the current required for the stimulation without loss of the therapeutic benefit, which both reduced the stimulation-relaxed side effects and extends the battery life of the implants. The lessons that have been drawn from the previous closed-loop studies also allow the development of tailor-made therapeutic strategies based on a broader adaptive approach. For patients, this paves the way for an individual path to recovery and/or personlized disease management.

The CorTec Brain Interchange technology platform is specifically designed for the research and development of closed-loop therapies.

Learn more about the technological features of Brain Interchange.

Do you have any questions regarding our Company, our Products or our Technology?
We are happy to receive your message!